Saxonville is named after the Saxon Factory Company, a woolen mill established there in 1824 by Abner, Benjamin, and Eliphalet Wheeler with several Boston partners. Later owners Michael Simpson and Nathaniel Francis changed the factory's name to the Saxonville Mills. Saxonville Mills merged with the Roxbury Carpet Company in 1919 and assumed the name of the latter.

In the Framingham town vital statistics for 1874, we find that the mills paid the highest taxes in town, $3,679.39, indicating that Saxonville was the industrial center of all of Framingham. Framingham had a population of 5,167 in 1875, [and] fully ten percent of the whole population was employed by the mills.

Excerpt taken from the Winter 2003 newsletter available at the friends of Saxonville.

The Saxonville Mill buildings were destroyed in the fire of 1883, except for mill building #7 made out of brick. The wooden mill buildings that had burnt down were rebuilt soon after and are still standing today. The Roxbury Carpet Company ceased its operations in the early 70s. 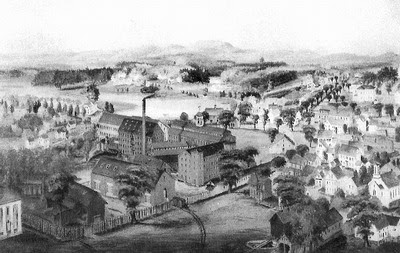 The Saxonville mills ca 1859. Notice the Athenaeum on the lower left. Mill building #7 (with the railroad track going inside) is the only building that survived the 1883 fire. The tower on top of the mill building on the upper right housed a Paul Revere bell that was used to call workers. Thanks to Images of America, Framingham. 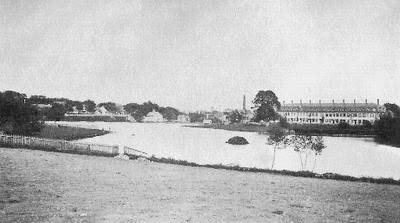 Tenements built by Michael Simpson for his workers (right), viewed from Water Street (on the other side of the Sudbury River). The building is still standing on Centennial Place. Note that Simpson had quite a few buildings built in Saxonville for his workers. Thanks to Images of America, Framingham. 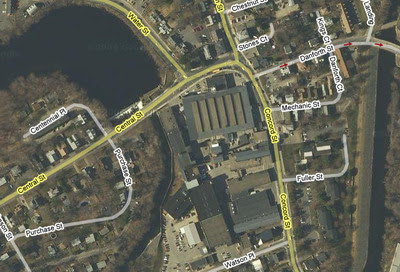 The Saxonville mills as they appear today. The mill building #7 stands across Fuller Street (when on the site, easily recognizable by its bricks which look much older than the ones on the other buildings). The Athenaeum is at the corner of Concord Street and Watson Place, the Fire Station is right next door along Watson Place. Notice the row house(s) along Danforth Street (just before the bridge) as mentioned in Michael Simpson of Saxonville. Thanks to googlemaps. 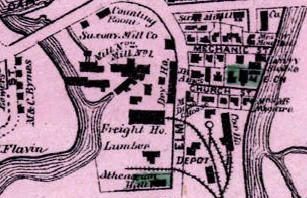 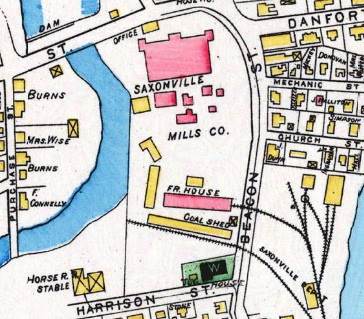 The "Historic Framingham" blog would like to thank the Framingham Historical Society for all they do to preserve the town's rich history, Stephen Herring for his wonderful history books on Framingham (and the Metrowest area) and the technology behind Google Maps which enables people to see where things are and how they look like from (way) above.

Fram Ingham
Feel free to write at historicframingham (at) gmail (dot) com. Thanks in advance.