The First Meetinghouse for the Framingham Plantation was built in 1698 on a piece of land that had been reserved (in 1693) by Thomas Danforth as ministerial land (set aside for meetinghouse, burial ground and training field). Of course, it is long gone now but there is a marker in the Old Burying Ground on Main Street indicating its exact location.

The first minister to serve in Framingham was Reverend John Swift of Milton. Having a meetinghouse and a qualified minister would be key to the town incorporation in 1700 (see Framingham 1700 town incorporation). When he died in 1745, he was buried in a grave right where its pulpit stood.

As the first settlers started passing away, there was a need for a proper burial ground. What better place than right next to the Meetinghouse? The Old Burying Ground, Framingham's oldest cemetery, has grave markers dating back to 1704.

In 1725, the First Meetinghouse was falling apart and it was decided that a new Meetinghouse should be built right where the old one was. Joseph Buckminster who had started buying Danforth's lands in 1706 claimed that the Old Burying Ground's land was his and therefore used all the tricks in the book to prevent the construction of the new Meetinghouse on his property. In 1730, the Town agreed to his claim because the land given to Reverend Swift for his services back in 1699 actually contained the 140 acres that Danforth had set aside as ministerial land. Oops, the Town would have to buy land for its new Meetinghouse. 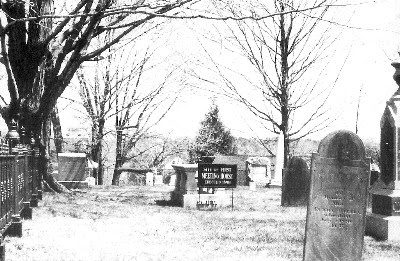 The Old Burying Ground on Main Street off Buckminster square. Note the marker indicating the site of the First Meetinghouse. Thanks to Images of america, Framingham. 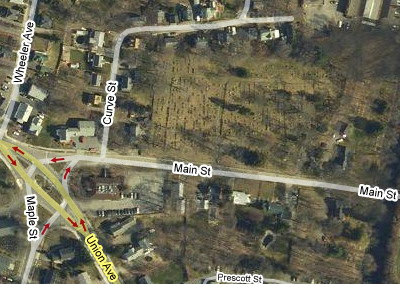 The Old Burying Ground on Main Street. Buckminster Square is where Union Avenue and Main Street meet, the Minuteman statue standing in the oval island. Thanks to googlemaps.
Posted by fram_ingham at 1:03 PM

The "Historic Framingham" blog would like to thank the Framingham Historical Society for all they do to preserve the town's rich history, Stephen Herring for his wonderful history books on Framingham (and the Metrowest area) and the technology behind Google Maps which enables people to see where things are and how they look like from (way) above.

Fram Ingham
Feel free to write at historicframingham (at) gmail (dot) com. Thanks in advance.